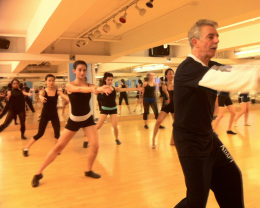 Brian Foley is one of Canada's busiest and most renowned dance teachers as well as a director/choreographer. A Toronto native, Brian made his professional debut at the age of ten, and has worked and trained with many choreographic greats, including Jerome Robins, Michael Bennett and Bob Fosse.

At age 19, he choreographed his first television series and has gone on to rack up an impressive list of credits. Among these credits are over 600 TV shows, numerous feature films (including "Heavenly Bodies", "Ice Castles" and "For Your Eyes Only") and Special Award Productions.

Since 2002, Mr. Foley has been and still is, the choreographer/director for the Calgary Stampede's evening Grandstand Show spectacle better know as, "The Greatest Outdoor Show On Earth"!

Mr. Foley is also known as the "Pied Piper" of Canadian Dance Teachers. His "Associated Dance Arts For Professional Teachers" (ADAPT), and the ADAPT Dance Examination System has set new standards for both teachers and students across Canada.